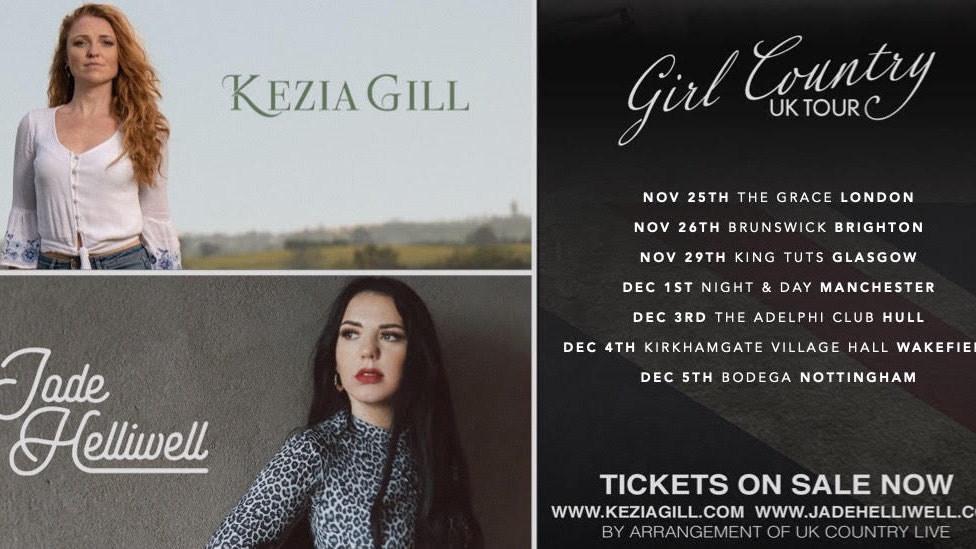 Jade Helliwell is a singer-songwriter from West Yorkshire. Her style is a notably British blend of pop and country influenced by the likes of Patsy Cline and Dolly Parton, as well as contemporary artists Maren Morris and Cassadee Pope.

Over the last couple years, she has performed alongside some of the big names appearing regularly at festivals such as Country to Country (C2C), Buckle and Boots, FSA Festival and Country on the Clyde and Nashville Meets London festival.

May 2017, a video of Jade singing with a busker on a night out in Leeds went viral and reached 23 million views across Facebook and YouTube. Her 2016 EP quickly re-entered the charts and reached #1 in the country charts and #8 in the official charts. She proceeded to win the Yamaha Hoedown competition and became endorsed as a Yamaha Artist.

Midlands, UK Based Singer/Songwriter Kezia Gill, has been singing professionally
for over 10 years. A vibrant mix of Irish and country influence, her sound is
completely unique.
Kezia plays all over the country, not only performing her own material, but
bringing her own vocal style to a variety of classic covers; With her unique vocal
range, multi instrumental talent, she makes every song her own.

“Kezia Gill is one of the most exciting artists to emerge on the
British Country Scene in recent years, and I’m sure we will be
hearing much more from this very talented young lady“

2018 was an extremely successful year, seeing Kezia burst onto the UK Country scene
with her debut Album ‘Kezia’. After several introductory festival slots, she went on
to win Female Vocalist of the year at the CCN Awards, and take home the Peoples
Choice Award for Soloist of the year at the BCMA Awards.
2019 has seen her success continue, kicking off with a tour in Australia, including the
Tamworth Country Music Festival, and winning Aristocrat Entertainer of the Year.
This was followed by a trip to Nashville, where Kezia performed in music city. The
summer saw Kezia play some of the UK’s top festivals including Buckle & Boots, FSA ,
Blackthorn and Millport. She was named as one of the Radio 2 BBC Introducing artists
and subsequently performed at The Long Road Festival. Her music has gone on to be
played on BBC Radio 2’s Bob Harris country Music show.
Kezia was nominated for 5 awards at this years British CMA Awards, making her the
most nominated artist of the year. She took home the award for ‘Best Female Artist’.
Kezia’s most recent trip to Nashville, saw her invited to play some of the most iconic
venues in country music. Firstly she joined Phil Vassar on stage at The Ryman
Auditorium for his Christmas Charity show, and then went on to play at The Bluebird
Cafe, in one of their prestigious song-writing rounds.