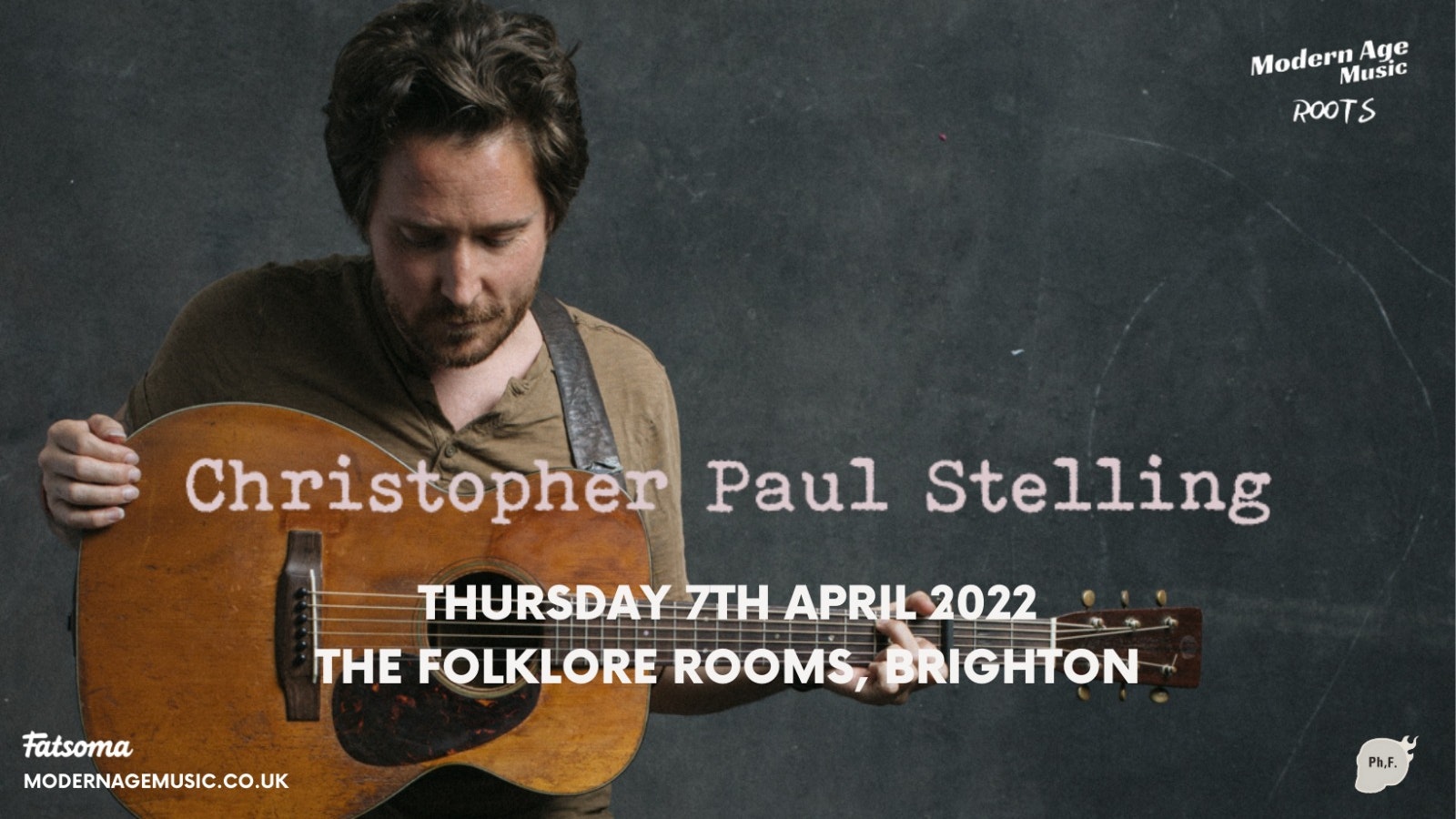 “IT’S NOT AMERICANA OR ALT ANYTHING, IT’S REALLY JUST SOULFUL FOLK MUSIC,” BEN HARPER SAYS OF BEST OF LUCK, THE NEW ALBUM BY CHRISTOPHER PAUL STELLING, WHICH HE PRODUCED.

Harper and Stelling met a few years back when the Grammy award winning musician-producer invited Stelling to open a series of shows. “Ben gave me a true gift back then,” Stelling says. “I’d been on the road for a long time and he put me onstage in front of his fans. He took me to the Beacon, The Ryman, Massey Hall, all these leg-endary rooms. Just to see that what I could do would even translate in spaces like that was revelatory.”

Harper says he instantly recognized a kindred spirit in Stelling’s virtuosic finger picking and soulful delivery. “It was like finding a John Fahey or Leo Kottke that was a really great singer,” he explains.

The recording of Best Of Luck culminated on a rainy night in Los Angeles, but the whole thing really began back in North Carolina. Stelling calls Asheville home, though he has been in a state of near constant motion for years. Leaving Florida while young to roam and perfect his craft, he made stops in Colorado, Boston, Seattle, New York and eventually North Carolina – all interspersed with relentless touring – hundreds of performances a year, in bars, coffee houses, nightclubs and theaters.

“The lifestyle of constant touring was gaining on me,” Stelling says. “And then I was back home, and in the abrupt silence, there was a clarity. The fumes of hubris I had been running on for years were all but gone and my relationship with my environment and myself had turned toxic. I was scared but resolved to persevere. On Christmas Day, after a few false starts, I gave up drinking and decided to take a look at myself.”

And then, as if following some greater cosmic narrative, an email arrived that New Year’s Day. It was Harper asking if he would be interested in making a record in Los Angeles. “I had never worked with a producer before,” Stelling says. “I had always controlled everything; it was how I had survived. But I needed a mentor and a friend; I was too far from shore.”

Stelling accepted an artist’s residency at the Stetson Kennedy House outside of Jacksonville Florida to prepare. Kennedy had been a folklorist and comrade of Woody Guthrie and Zora Neale Hurston. Woody stayed there for extended periods as well. “I moved into this little house in a North Florida swamp just an hour from where I was born and raised,” Stelling says. “And I proceeded to freak out. It was the first time I’d just sat still for years. Mostly, I took inventory of myself. But I left feeling like I’d found a thread. After that, I would send Ben demos. He would respond with encouragement and tell me to keep digging, so I’d keep digging. Looking back, the whole process was the medicine I needed.”

Best Of Luck is a supremely accessible and finely crafted record that deftly merges genres. Harper, who has previously produced records by Mavis Staples, Rickie Lee Jones, The Blind Boys of Alabama and others, recruited an all-star rhythm section with Jimmy Paxson (Stevie Nicks, Dixie Chicks) on drums and upright bass player Mike Valerio (Randy Newman, LA Philharmonic) to lend a versatility and finesse. “I really believe this record is the intersection where folk and soul meet,” Harper says.

The album’s title, Best Of Luck, mirrored perfectly the emotional landscape in which it was created. “Depending on how you say it, it can either be a blessing or a dismissal,” Stelling says. “And that was exactly the point I was coming to with myself, my career as an artist, as a friend and as a person.”

The first track, “Have To Do For Now” is a haunting evocation of a moment between an unexamined past and an uncertain future. The guitar refrain evokes a beautiful sense of wistfulness about the past. “It’s a song about the fear of losing memories and the re-lief of letting them go,” Stelling explains. “It was written in one sitting. A flood of memo-ries moving back to when I was very young and I fell from a tree house and split my head open. I’d never really processed that trauma but it’s one of my earliest and most visceral memories. I can’t help but wonder how that day and others like it have influ-enced my life.”

The sonic simplicity of “Lucky Stars” reveals a richness of melody and emotionality. “It’s part love song, part lullaby,” Stelling says of the track, “with a gentle touch from the band and Ben’s haunting lap steel matching my guitar in the instrumental section, ad-ditional vocals by my partner. It’s about gratitude and the mysteries of the universe. Even to just be here and marvel at it all is enough for me most times. Even if it’s mean-ingless, it’s beautiful.”

Throughout the record, discontent and self-doubt are transformed into messages of re-silience and hope. “Trouble Don’t Follow Me” captures this perfectly, with an upbeat almost anthemic rhythm and soulful, gospel-tinged vocals. “It comes as no surprise to me that one of my most optimistic songs could be written in the most difficult hour,” Stelling says. “When all I needed was a little hope and a song I could play night after night and not get tired of. Something that captured the basic recipe for endurance. A song about marching on, a warning to anything that might stand in your way, and needing to feel strong for the people around you, so you can inspire them to do the same.”

There is an uninhibited defiance to “Until I Die,” a revved up folk-blues featuring a beautifully raw guitar and beat. “This song is a kaleidoscope in the hall of mirrors, a psychedelic rant,” Stelling says. “One thing is for certain amidst the chaos and uncer-tainty, and that is having someone to love and who loves you back is unrivaled.”

When Harper talks about his admiration for Stelling, he refers to his family’s legendary folk music store, filled with instruments and a fluid merging of styles and genres. “When I listen to Chris, I hear my grandparent’s store in Claremont,” Harper says. “He’s carrying on that tradition. A guy that can play any instrument from any country and play it with real feeling. He crosses genres but manages to respect them; he is a folk singer with an unusual soulfulness. He understands where this music comes from and why it’s remains so essential. Of all the record’s I have produced, this is one I’m most proud of.”

For his part, Stelling says, “This record was about learning to trust the people around me. If anything, after years of closely guarded decision-making I’m delighted by the re-sults of this collaboration. This record has an undeniable sense of clarity. The songs are lean but never feel incomplete. Ben knew how to coax me out of my well-worn comfort zones, how to move fast and spontaneously and put me on the spot, and how to retreat and give me space to process things. People who know me have said they hear a lot more of me in this album than anything before. Realizing I couldn’t heal the world, I started to heal myself, and I couldn’t be more pleased by how that sounds.”